We had our sports day on June 14th and what a day it was! What a beautifully warm day in summer it was - the perfect day for our sports day. All classes took part in a fun mixture of games and races.


They had great fun taking part in the Sack Race. To do this they had to "wear" a sack and then hop to the finishing line as quick as they could. 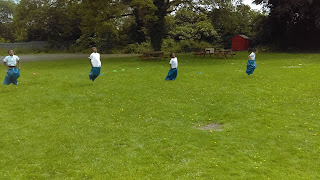 The children in action during the Sack Race.

They then took part in a Sprint where they had to run their fastest from one side of the field to the other. The children were extremely quick - it must be all that healthy food they have been eating this year! 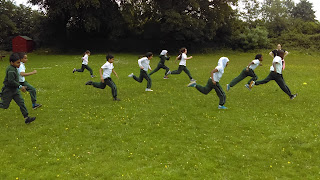 The children sprinting across the field.

Next was the Tug of War. Two teams positioned themselves either side of the thick rope and pulled and pulled. It was a tense tug as both sides gave it all they could. The children were so strong! 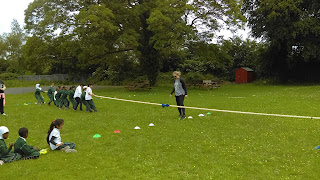 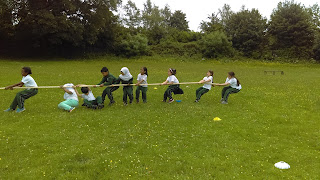 The children pulling during the Tug of War.

Another exciting race was the Hurdles. The children had to run and jump over each hurdle. It was even trickier because the hurdles were different sizes so they had to really concentrate. 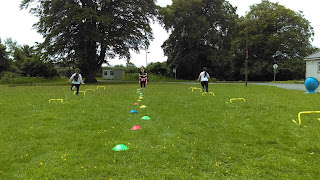 Here are the children jumping over the hurdles. 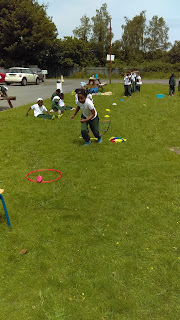 The children having fun during the Obstacle Course.

At the end of the day the children relaxed outside and enjoyed a cool ice-pop. The winners of all the races and games were presented with a certificate of achievement and a prize.

They had such an amazing day this year at the sports day. The children should be very proud of themselves as were super fit. All the work they have been doing this year to secure our Active Flag has been paying off.

Well done everyone for all your hard work at the sports day!!
Posted by Shaheeda Zainab Independent Muslim School at 07:36 No comments:

Check out our fantastic pupils being very active and enthusiastically trying out new sports and activities every day ! We had so much fun getting active and learning new skills including yoga, boxercise, HIIT class, basketball, Tug of war, Ultimate frisbee, skipathon and penalty shoot out.

As being physically active is encouraged wherever possible throughout each day , it would be a great idea to walk or cycle to school if possible, safely and accompanied by an adult always.  We invited a local member of An Garda Siochana to talk to all pupils in our school about road safety in these situations. 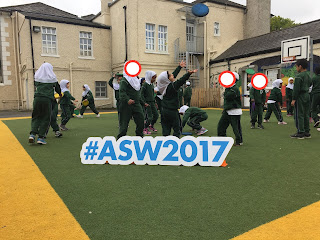 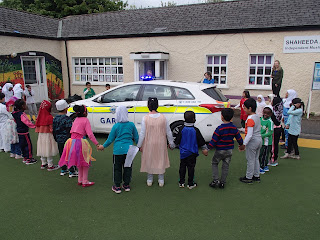 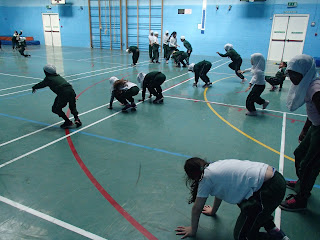 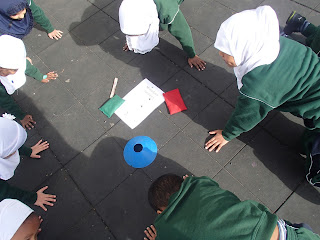 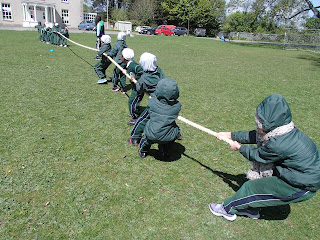 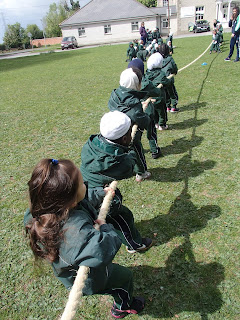 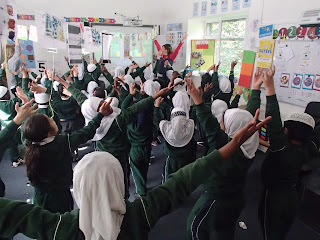 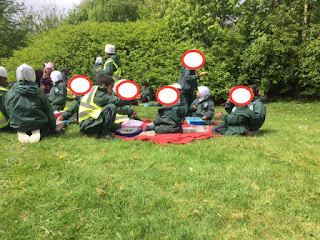 
Posted by Shaheeda Zainab Independent Muslim School at 11:46 No comments:

The Department of Education and skills and Healthy Ireland encourage all schools to organise an Active School Week with in their school each year as part of the Active Flag initiative.
We Shaheeda Zainab Independent Muslim Primary School had our ASW April 24th- 28th and it was a huge success, enjoyed immensely by all who participated throughout the week.

Big thank you to all the staff members for taking part and helping out , especially Ms. Lynch for organising the week and all the fun / physical activities. Ourselves and the pupils were delighted at the turn out of parents/ family members for the active picnic on Friday . We hope you enjoyed it as much as we did!

Posted by Shaheeda Zainab Independent Muslim School at 11:23 No comments:

The Super Troopers programme is working very well with and complements the Food Dudes programme ongoing in our school at this time. It is part of our plan and efforts to get an Active Flag for our school. This programme focuses on increasing physical activity levels among children. It ensures children have fun and enjoy getting fit, healthy and active. It covers all aspects of a healthy lifestyle -
*physical activity
*wellbeing
*nutrition
It encourages a healthy lifestyle which we will continue to reap the benefits of for life and will help us achieve an Active Flag, so keep trying your best! 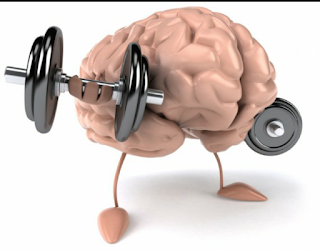 Posted by Shaheeda Zainab Independent Muslim School at 10:54 No comments: 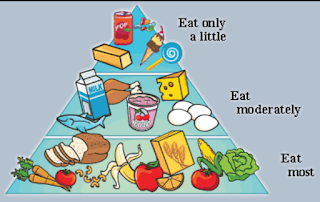 FOOD DUDES:
Food Dudes is a programme designed to promote healthy eating both in school and at home. It's a fun, effective programme that encourages children to include more fruit and vegetables into their diet. The children receive lots of stickers/ prizes and certificates throughout the programme, as well as letters from the Food Dudes characters which keeps them motivated and interested. They learn a lot about food nutrition and the importance of healthy eating and all the benefits of having a variety of fruit and vegetables in our daily lives.

Posted by Shaheeda Zainab Independent Muslim School at 10:01 No comments: 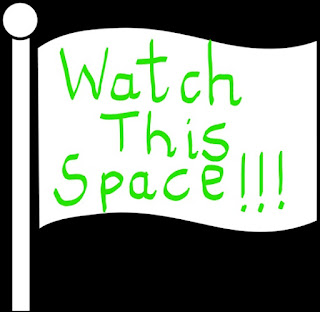 We are well on our way to achieving an Active School Flag for our school, thanks to the continued joint effort made by our teachers, parents and most importantly all our pupils each week. 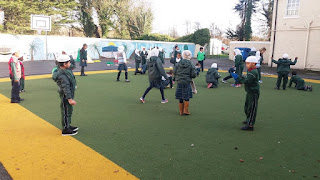 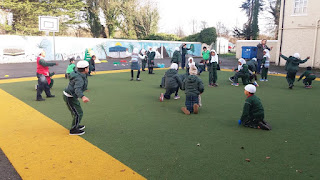 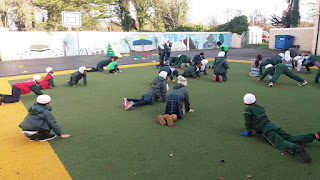 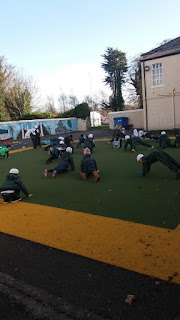 Circuits:
Every Thursday First class pupils set up various activities in the playground at lunch time for everyone to take part in and enjoy..... 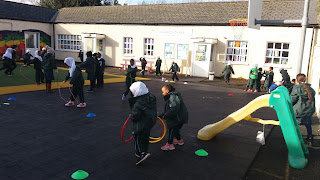 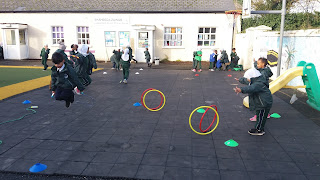 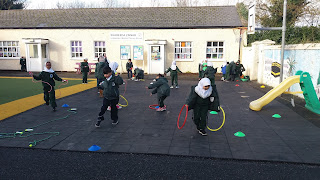 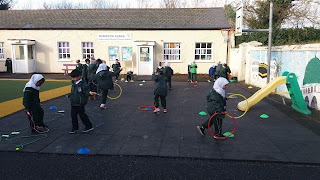 Friday School Fun Run:
Special thank you to all parents who take part in the fun run every Friday, your participation really encourages all involved and builds the school team spirit .... 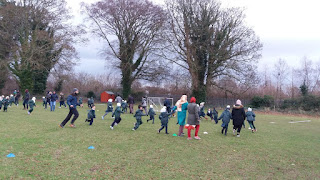 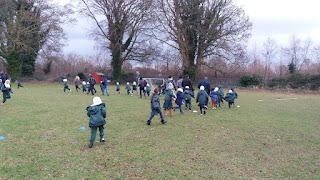 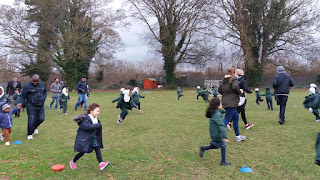 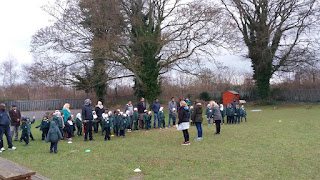 Posted by Shaheeda Zainab Independent Muslim School at 04:49 No comments:

What is the Active Flag?

In order to get an Active Flag we have to show how physically active and educated the school is as a whole. We have to work hard on three areas - Physical Education, Physical Activity and Partnerships.

Once we show how physically active we have been we hope to be awarded the title of Active Flag School (AFS) and we will get our Active Flag to raise outside the school.

This year the school will be taking part in as many physical activities and initiatives as possible in the hope that we can achieve an Active Flag.

Please help us to achieve this by taking part and encouraging your children to take part in any active events organised by the school. We might even ask parents to participate in activities from time to time!


Posted by Shaheeda Zainab Independent Muslim School at 06:19 No comments: